Difference between revisions of "Projets:SolderStationWEnglish"

From Electrolab
Jump to: navigation, search 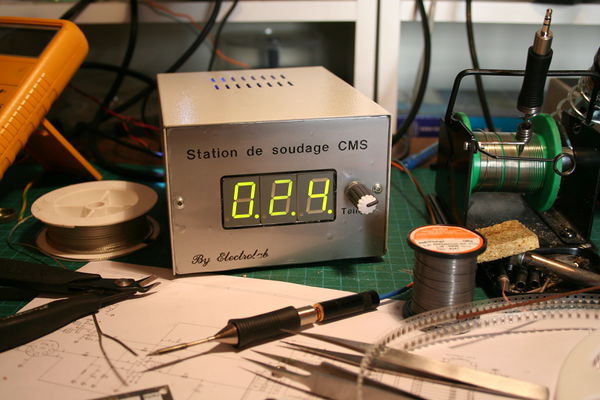 How this stuff is working

This project is based on Martin Kumm DC3MKB’s project (http://www.martin-kumm.de/wiki/doku.php?id=Projects:SMD_Solderstation), published in July 2014. Martin made a very interesting hack: using an Arduino Uno and a Weller soldering iron tip to build a low cost professional soldering station.

Other soldering stations based on the same recipe came to life almost everywhere. Including the one made by Andreas, DL4JAL (http://www.dl4jal.eu/smd_loetstation/smd_loetst.html), who preferred to use a Microchip PIC18F2520 microcontroller. The power front-end and the temperature input network are strictly the same as Martin's. Its main disadvantage is that a newbie will have more difficulties using PIC MCUs and will have a harder time changing the firmware, compared with DC3MBK's approach, as an Arduino can be programmed using a simple USB cable.

The working principle is simple: The tip of the iron includes both the "soldering tip" itself, the heating resistor and a temperature sensor.

The Arduino uses this probe to read the iron temperature (on port A7), and compares this value with the preset temperature requested by the user. If the measured temperature is too low, the Arduino increases the duty cycle of a PWM output (Pulse Width Modulation) on port D3. If the temperature is too high, the duty cycle is decreased. These variable width pulses are used to briefly open and close the power supply circuit of the heating element integrated in the tip of the iron. This closed loop -measuring, comparing with a set point, proportionally changing the value of the current flowing into the circuit- is a standard in the world of Process Control, and is called a "PID loop" (proportional-integrated-derived).

Why a temperature control system

Electronic geeks, Ham Radio or hackers, make less and less use of discrete “thru hole” components, and more and more of surface mounted components. These components require a very precise soldering temperature (eutectic), which strongly depends on the type of wire, on the class of components, and on the nature of the solder contact.

- The solder wire is a polymetallic compound, and its melting point depends on the nature of its metallic constituants. A tin-lead-silver alloy melts at 178°C, a tin-lead at 183°C, tin-copper-silver (so-called "ROHS welding") at 217°C, and tin-copper at 227°C . Without a precise control, it is difficult to precisely reach this point. Too cold the soldering wire won't melt, too hot it will accelerate oxydation of the alloy and cause microcracks. Worse, with the new lead-free solders, poor temperature control will cause micro-whiskers that could eventually cause short circuits.

- All components are not created equal in terms of resistance to high temperatures and thermal shocks. Resistors are ... more resistant to a long contact with a hot iron tip. That’s definitely not the case with quartz or some active components.

- The nature of the solder pad can cause troubles. On a PCB with a large ground plane, heat dissipation is such that it can cool down an iron tip immediately if it is too thin and offers little thermal inertia. The copper of the PCB is an excellent heat radiator. To minimize this problem, it is advisable to use "thermal breaks" on each grounding pad or connected to a large copper plane ... and / or to increase the temperature of the tip itself, with the risk of destroying the glue between the copper and board of your PCB - generally composed of glass fiber and epoxy. For this as well, a very good and efficient temperature control is required.

Why this soldering tip range

- because it has been manufactured by of one of the most serious manufacturers of soldering tools. Some Electrolab members have had Weller stations for over 35 years and still find the spare parts needed for their maintenance.

- because it needs less than 5 seconds to heat up and 10s to cool down, allowing to almost instantly exchange a tip for another one... which would require at least two different soldering irons when using other soldering stations. Such quick heating and cool-down times allow the control system to include a “stand by” mode which saves energy and prolongs the life of the soldering tip.

- because its price is affordable, between 28 and 35 euros (without VAT)… almost the price of an entry-level soldering station made in China.

The Electrolab Soldering Station kit is available in 3 versions

A warrior version including, for only 5 Euros:

A full kit which includes, for only 35 Euros:

Beware: the Arduino Nano is not included in the "full kit"

This edition is available only during special event and shows on the Electrolab booth.

This soldering station needs a 12Vcc/60W input voltage(not included). Any kind of 12V switching power supply easily found on eBay will do the job.

Note also that Ham radio and other “low signal/high frequency pundits”, who often use components such as AsGa transistors and highly sensitive and fragile component which could not cope with static and transient voltage coming from the 220V mains, prefer to use series-regulated power supply with a good old transformer, a diode bridge, filtering capacitors etc.